As I told you a week or more ago, one of the most difficult things about fasting, in my opinion, is that it causes insomnia. It makes it difficult to sleep.

One of my personal mantras is “Listen to your body.” I really believe in this. Whether I am fasting, feasting or anything else, I believe in listening to what my body is telling me, and following the instructions that my body is sending to me. I believe that when I do that, it keeps me safe and improves my health.

When fasting, there have been times when I felt that I needed to end the fast and to eat something, and I have always followed that feeling, because it is what my body is telling me, so I think it is the right thing to do. There is no shame in doing what your body is telling you that you should do. In fact, it is more a badge of honor than anything else.

So, over the past weeks, as I have been thinking about my inability to sleep at the times when I “should” sleep, I realized something. One night, I was laying in bed trying to get to sleep, after a long while, I thought to myself… “My body just does not want to sleep now” so I got up and did something else. As I continued to think about this thought of my body not wanting to sleep, I decided that in the area of sleep, I was not following my mantra. I was not listening to what my body was telling me.

I made a decision 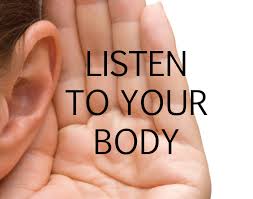 So, I made a decision that I needed to more closely listen to my body and do what it was telling me. I needed to stop trying to force myself to sleep at times when my body was telling me that it did not need any sleep. I decided that when I was tired I would lay down and sleep. When I woke up, I would get up and do something else, and then when I was sleepy again, I would go to sleep. Up until now, I have always followed the clock. If the clock told me that it was time to sleep, I slept. When it was time to get up (according to the clock) I would get up. Now, I decided to just do what my body was telling me.

So, starting last week, I have been going to bed at about 9 PM, and then I would sleep until 10:30 or perhaps 11, whatever time I woke up. I would then get up and work or do something that needed to be done until I was tired again. I found that I was getting tired at around 3 AM, and I would go lay down and sleep until 5 AM or 6 AM, just whenever I happened to awaken again. I am finding that I am following this pattern in the early afternoon as well. So, I am sleeping 1 1/2 to 2 hours usually 3 times per day, for a total sleep of 4 1/2 to 6 hours per day. When you sleep several times per day like this, that is called Polyphasic sleep.

My experience with Polyphasic Sleep

To be honest, I really don’t have any “experience” with polyphasic sleep. However, years ago, I used to read a blog where the writer (Steve Pavlina) did a lot of unusual “self-improvement” type things. He would usually try these things as experiments, and then if he liked the effects he would incorporate the item into his daily life. I followed Steve for many years, but he started getting into some practices that I did not really agree with (specifically, polyamory, where he would have intimate relationships with multiple people at the same time), so I decided to stop following him.

The first such experiment that I recall Steve doing was with fasting. As I recall he did some Intermittent Fasting and then some longer-term fasting as well. Next, I recall him doing the polyphasic sleep.

Recently, I was talking with a friend of mine via email, and I mentioned to him that I was going to start listening more to my body and sleeping at the times when it was sleepy. He already knew about my fasting. He mentioned to me that I was starting to sound like Steve Pavlina (he also used to follow Steve) and I realized that he was right, although it was unintentional.

Right now, I am sort of an “unofficial bachelor”. My wife, Feyma, is in the United States and will be doing some seasonal work there for the next 4 or 5 months, so that will also give me the freedom to experiment with things like Polyphasic sleep (don’t worry, I am not going to do a polyamory experiment!) while she is away. Doing something like that while my wife is around could be disruptive to our marriage, but this is a great opportunity to do something like that. If I try it and find that it has a positive benefit on my life, I feel that I could already be in the routing when Feyma returns and it would not be all that disruptive if I am already in the routine.

I do think that listening to your body is always a good thing, though!